Harishchandragad, a hill fort in the Ahmednagar district of Maharashtra, is one of the most challenging treks in the Western Ghats. Situated in the Malshej region of the ghats, it is at a distance of approximately 90 km from Kalyan. This hill fort can be approached from multiple routes. One such route via Nalichi Vaat (which translates to ‘passage through a gorge’) is a channel that lies to the extreme right of the mountain. It is the most difficult path to the top. Popular among climbers and experienced trekkers, Nalichi Vaat involves a near 80 degree climb, involving steep rock patches. The trail begins on a stream bed filled with large man-sized rocks and eventually leads to the foot of the gorge.

Harishchandragad fort is quiet ancient, with its origin dating back to the sixth century. There are caves situated all over the fort, believed to be carved out in the eleventh century. The various temples and carvings in the caves indicate that the fort belongs to the medieval period, since it is related to Shaiva, Shakta or Naath. Later, the fort was under the control of the Moguls. And by 1747, the Marathas captured it.

The cave of Kedareshwar hosts a big Shivlingam, which is surrounded by water. The lingam is surrounded by four pillars that essentially represent the four yugas of life on earth. The general belief is that the current phase is the Kali Yuga. The day the fourth pillar breaks down will be considered the end of this era.

There are no reviews yet.

Be the first to review “Trek to Harishchandragadh” Cancel reply 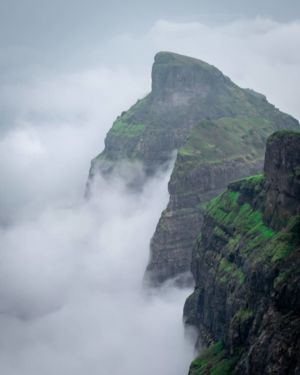